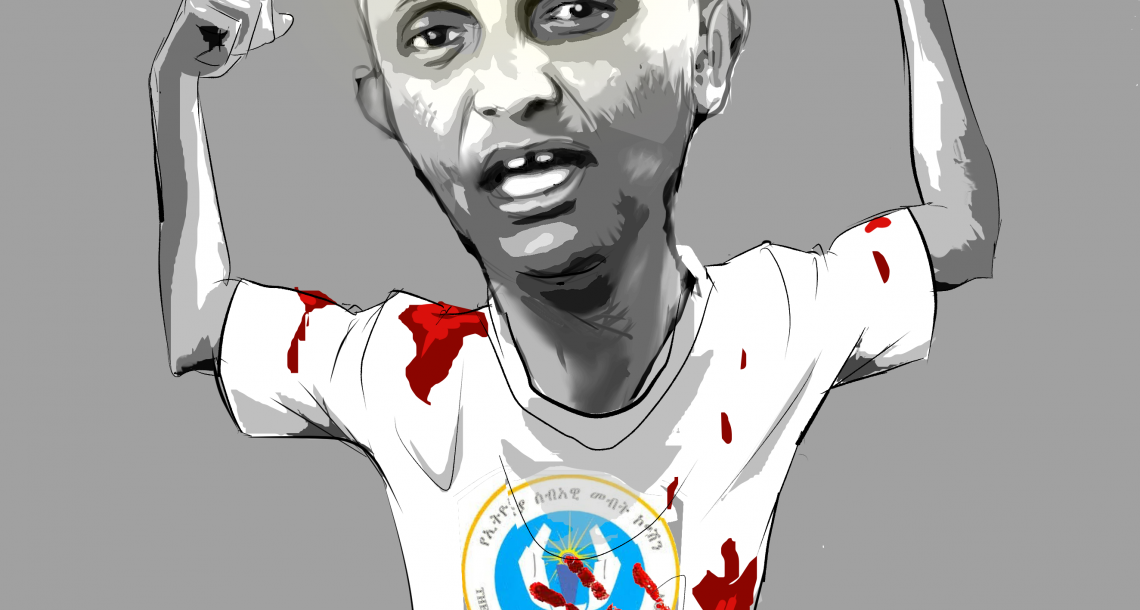 Since the outbreak of the genocidal war on Tigray at least two pieces have been published by
major international newspapers that bolster the public image of Daniel Bekele, Commissioner of the Ethiopian Human Rights Commission (EHRC). The puff pieces are designed to counter persistent accusations that Daniel has instrumentalized his ‘reputation’ as a ‘human rights activist’ to sanitize Abiy Ahmed and Isaias Afwerki’s genocidal adventure in the Tigray region of Ethiopia.

Employment of clever diction and obfuscation to justify or otherwise diminish crimes against humanity has become an established trend for the EHRC and for Bekele personally. One such incident was brought to life by a Guardian correspondent’s decision to add insult to injury by ending her article with the quote: “It is right that an Ethiopian human rights violation should be addressed by an Ethiopian human rights institution, in partnership with our friends and partners”.

This sentence blurs the line between human rights abuses (what the EPRDF and it’s PMs have been accused of) and crimes against humanity (what Prosperity Party and the Ahmed administration are accused of). Its’s unclear why the Guardian would assign a correspondent that isn’t aware of this basic distinction or is willing to take part in this charade without interrogating it? It’s even more unclear why a man celebrated for his ‘human rights’ work and who heads what should be the countries leading humanitarian watch dog is apparently equally oblivious.

Crimes considered affronts to humanity are beyond the investigative or judicial jurisdiction of any single country irrespective of the independence of any given institution or the ‘credibility’ of the individual at the helm. The breach of this principle is evidence in how far the international community has been willing to go to prop up the Ahmed administration irrespective of the shocking levels of violence the country has experienced during his tenure. Amongst the many horrendous ‘recommendations’ found in a leaked UNDP memo are plans — now being strictly followed– to announce any findings of the joint investigation between the EHRC and the UN in a timeline that facilitates Ahmed’s re-election.

What Daniel suggests, and the correspondent gives credence to ignores that a subset of Ethiopians is being erased by the Ethiopian government making an ‘Ethiopian solution to an Ethiopian problem’ evidently difficult to achieve. It is misleading, even dishonest, the guardian to legitimize a ‘solution’ sanctioned by the same state accused of committing these crimes by insinuating it could serve to cool ‘anti-imperialist’ sentiment.

The infantile attempt to evade accountability by the Ethiopian government has been accompanied by calls to burn the American flag by Andargachew Tsige, a broker of the Ethiopian-Eritrean peace deal and member of EZEMA(formerly KINIJIT), a government aligned opposition group. It is to be recalled that former members and sympathizers of KINIJIT, including Daniel Bekele, Birtukan Mideksa and Berhanu Nega were promoted as champions of human rights and democracy in the wake of the 2005 elections; those not leading pro government opposition groups now occupy posts within the Ethiopian state that require the appearance of independence. While the EPRDF government’s actions in 2005/6 were widely viewed as heavy handed, it should now be evident that their accusation that anti-Tigrayan hate speech was being deployed to violently overturn the right to self-determination of the respective nations, nationalities and peoples of Ethiopia is now bearing fruit. It also implores the international human rights industry’s sanctification of these individuals to be seriously revised. Bekele was not arrested, as is always claimed, for saying the elections (unparalleled in their competitiveness before or since) were rigged. The lie now has to contend with Bekele’s role in cheerleading the implementation of the inhumane designs he was accused of promoting in 2005.

Genocide starts with the act of normalizing and othering of a people. International media, civil society groups within Ethiopia, and the Ethiopian government have all normalized the othering of Tigrayans to a degree that reports of the presence of a foreign military, combined with the use of rape and famine as weapons of war have become acceptable, encouraged, and at times described by outside observers as having bolstered the governments “popularity”. Hitler and the Nazis were as popular in Germany as Mussolini and the fascists were in Italy.

The EHRC’s gleefully tweeted out the Guardians confident assertion that the EHRC no longer provides legal cover to the government’s human rights abuses and yet your article also claimed that “Especially damaging has been the growing perception among Tigrayan’s, about 6% of Ethiopia’s population, that the commission is partial towards the federal government and hostile to the TPLF. […]For now, though, such concerns are secondary.” How can the author categorically claim the EHRC has improved its record in an article that owes its existence to the need to address accusations that Bekele and the EHRC are whitewashing crimes and providing the government with legal cover? It’s difficult to decipher whose intelligence the Guardian is insulting, the readers or their own? Italy, such is the nature of populist governments and their inevitable wars. The percentage of their Jewish populations were perhaps even more minute than the 6% of the Tigrayan population of Ethiopia, a number the correspondent generously litters throughout all her articles unencumbered by knowledge of the connotations it’s been forced to bear through the concerted efforts of the likes of EZEMA through their media wing ESAT.

His attempt to discount the testimonies of Tigrayan refugees in Sudan, whilst also admitting to the circumstances to which they testified is also never mentioned. Nor is his crude suggestion that Eritrean refugees abducted by the Eritrean government may have willingly returned to Eritrea, presumably because since they had initially fled Eritrea transformed into a paragon of human rights, democracy and economic opportunity.

Instead, the victim’s ‘secondary’ concerns are frivolously dismissed. ‘Comments by the commissioner early on in the war significantly downplayed its humanitarian impact, but the perception is also due to his personal background: in 2005 Daniel was arrested and imprisoned for more than two years after he denounced elections as rigged.’

His statement that the situation in Tigray ‘isn’t as grave as initially feared’ should have begged the question, what was initially feared, or, perhaps desired? What amount of destruction, looting, rape, and killing would have adequately satisfied his racism to the extent that he’d be able to make unqualified statements condemning crimes against humanity and war crimes? Nothing could possibly vindicate the EPRDF governments ‘heavy handed’ actions in the wake of the 2005 elections more than the fruition of their accusation that what was sought was not ‘democracy’ and the protection of ‘human rights’ but the overturning of the nations, nationalities and people’s right to self-determination through the incitement of genocide. KINIJIT, the first iteration of EZEMA, whose leadership remains close to Afwerki’s human rights loving regime, employed slogans such as “send the Tigray to Mekelle and his property to the Kebele ” during those elections. The ‘hero’s’ the global human rights industry manufactured in the wake of the 2005 elections have shown their true colour as extreme right-wing Amhara supremacists and exposed the discourse around democracy in Ethiopia to have always really been about something else.

That Daniel Bekele made these comments three months into the war when the extent of the humanitarian crisis was already well known at one of several panels, he took part in as part of a propaganda exercise for the Ahmed administration along with the likes of Berhanu Nega and Gedion Timothewos is never mentioned. Incidentally, the commission has yet to produce a report on the so-called reprisal killings or ethnic cleansing.

Equally misleading, even dishonest, was the correspondents claim that the EHRC has more independence from the ruling party because in the past almost all commissioners were ruling party members. Daniel Bekele was personally selected by Abiy Ahmed, and there has been no institutional change in the relationship between the commission and the government, that is, no change in its ‘legal autonomy’ as the correspondent conclusively declares without presenting proof. Similar to Bekele, previous commissioners have been accused of lacking independence, and like Bekele none were officially ‘ruling party members’. Yet, none, it’s true, have had the same international backing he, and the Ahmed regime clearly enjoy. The supposed independence of this institution hangs solely on Daniel Bekele’s ‘credibility’, not the institutions. What’s alarming is that when international donors do press him on whitewashing human rights violations through compromised methodologies, he claims he’s not independent, and that he’s “between a rock and a hard place”. The idea that someone should be allowed to facilitate fascism because he or she is able to negotiate the white milieu is misguided and dangerous.g in areas of Tigray annexed by the Amhara regional government. In fact, the commission’s report on the Mai Kadra massacre is the only one that’s been issued independently of international pestering. The commission has so far published one of three reports from the Mekelle branch of the EHRC but only after significant diplomatic and media attention as was the case with the EHRC’s report on the Axum massacre making it vulnerable to accusations that its interventions have been politicized.